The Origins of Wooden Pallets

The Origins of Wooden Pallets 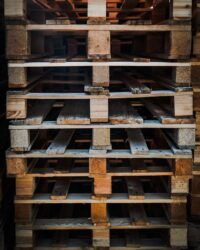 Wooden pallets are found across a wide variety of professions and industries and are not something most people pay any attention to because of how common they have become. While they are a part of our everyday lives, it is interesting to learn about their origins and how they have played a major role in the history of our economy.

Prior to the use of wooden pallets, boxes, barrels, kegs and wooden crates were used for the storage and transportation of goods. Skids were sometimes used and their birth can be dated back to the early 1920s, which is when the modern forklift was created. Once this occurred, traditional skids evolved into pallets and this is what revolutionized the way in which goods were gathered, protected and stored. Originally, wooden pallets consisted of stringers, which had boards fastened to them to create a platform for all of the goods to sit on and it also had space underneath for the prongs of the forklift. In 1925, bottom planks were added to the pallet design and this addition allowed goods to be stacked and moved faster and more easily. Shortly after, warehouses across the world started to rely on wooden pallets more and more.

The popularity of wooden pallets increased during the Second World War, and this was when the mass production and standardization of pallet sizes took place. The universal pallet size of 48” by 40” was established, which made the shipment of goods and the process of mass production easier. These helped countries ship heavy goods back and forth during the war.

If you asked the average person what they know about wooden pallets, they probably wouldn’t have much to say. But like many unsung heroes of the modern world we owe a lot to these unassuming wooden constructions. Not only do wooden pallets allow us to transport goods all round the world, but they also help with storing them safely too. They are the backbone of every factory, workshop, supplier and store on earth, but where does the history of the wooden pallet begin, and what is their significance in the world today?

The history of the wooden pallet starts with its predecessor, the ‘Skid’. A skid was a simple wooden surface upon which goods could be piled, or perhaps wheeled along. Skids date back to ancient times with evidence of their existence even as far back as the Egyptians.

Pallets as we would recognise them now were not born until the forklift truck arrived. When the first forklift truck was invented in 1915, skids were slowly adapted to suit this new machine. The first patent for a pallet is from 1925 by a gentleman called Howard T. Hallowell who named it a “Lift Truck Platform”.

Pallet use and development during World War 2

Like many technological advances, the history of the wooden pallet owes much to WWII, when the demand for pallets skyrocketed. It was during this time that the four-way pallet was invented. Pallets were used by the Allied and US military in order to effectively transport weapons and armaments as quickly as possible.

As is often the time in war, developments were made quickly and the patents not filed formally until after the war had ended. A surge in all sorts of patents occurred after the war, including many for wooden pallets. One such patent was from 1945 by Robert Braun on the first four-way pallet and another form Norman Cahners in the same year for a disposable pallet. 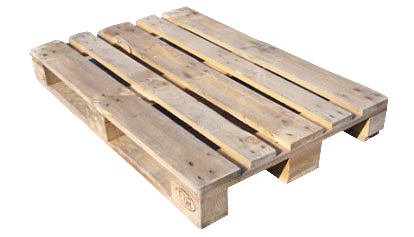 Pallets in the modern world

Once the war ended, wooden pallets became part of mainstream business and it was during this time that the first narrow aisle electric reach truck was created, which changed the way warehouses operated. Wooden pallets are now a big part of the mainstream shipping industry and are used regularly to move different types of goods across the world. The history of the pallet goes way back and

its effectiveness continues to prove itself today. There is no doubt that pallets have helped the shipping industry tremendously and have allowed it to expand and grow into what is today. Improvements to the design and material of the pallets are constantly being made and while these aspects may change, the popularity aspect will not and pallets will continue to be around for a very long time.

H & H Woods Products can provide you with wood crates, pallets and boxes, so if you are in need of any of these items, give us a call today!